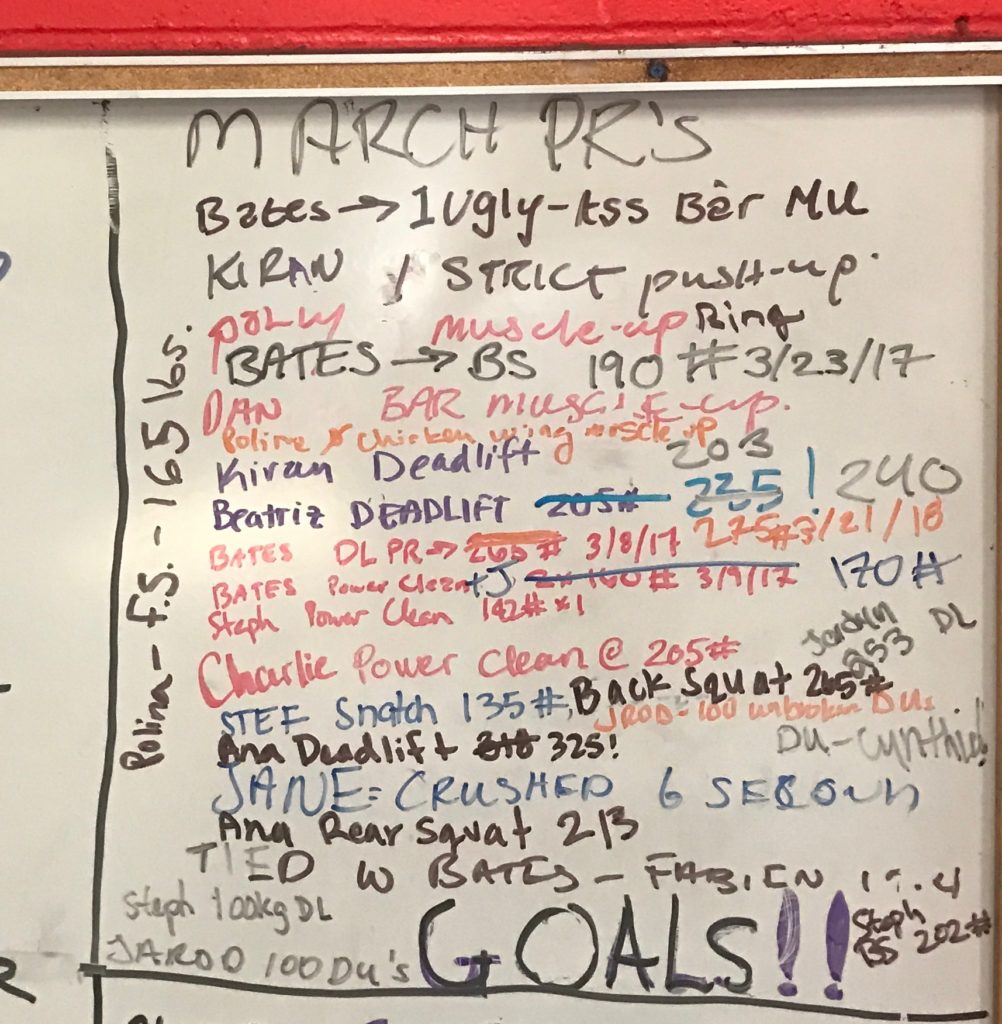 Massive shoutout to all of our member’s for being such amazing and inspiring people. Where do we start? There has been so much that has happened in March.  Let’s start with

Jane “the pervert” as mentioned before last year she was crushed when she did not pass her firefighter physical by 6 seconds.  After of a year of training here at Dogtown and her own she  CRUSHED the physical by two minutes. Congrats once again to #Jane.

Next up, Ana Martinez with two massive PR’s last month. She achieved her 2017 goal of #deadlifting 325 pounds and followed through with a 213# Back Squat as well. Additionally, she really pushed herself during the Open.

Jarod  killed it with 100 double under straight. (Nice work man).

Next up we have Charlie coming through with a pretty solid Power Clean of 205 pounds. For a skinny guy  he can lift.(good work man)

Beatriz  and Kiranjit, I am just gonna lump you two together because you guys are attached at the hip most times. Beatriz had a nice PR in her favorite move of all time, the deadlift 203#.

Kiranjit also had a nice #deadlift PR  of 203# as well. (told yah, they’re attached at the hip). She also had her first strict push-up (SHE HATES PUSH-UPS)!!!!

Stephanie  overcame some injuries, self doubt and finally took on the 200 pound club. She is now a card carrying member of squatting heavy shit. She also pulled 100kg in a deadlift (forgive her s for using kilograms she’s Canadian) and power cleaned 142#)

Stefanie  just went ahead and snatched 135 for shits and giggles (good work) I love you seeing you lift.

Daniel K. bust out his first Bar Muscle-up and it didn’t have chicken wing (Nice work man) and a real #handstand push-up.

Polly had her first ring muscle-up and front squatted 165# killing the game.

We also have Cynthia V with her first double-unders.

What can I say? I really appreciate everyone pushing themselves to the limit and getting past mental and psychical barriers. Your success in turn inspires others to push themselves as well.

Lastly, the PR board is not only for METCON members but for EVERY MEMBER of Dogtown. if you accomplish something you consider please don’t hesitate to write it up on the board. It can be something as simple as getting your first double-under to something as finishing one of Dan’ workout’s under an hour. (Shot’s fired)