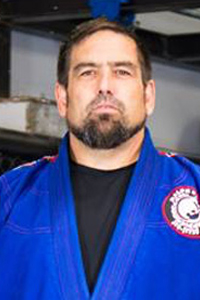 Alan Joyce has been training Brazilian Jiu Jitsu since 2005. He was awarded his black belt by Eduardo Fraga of Ralph Gracie Berkeley in October, 2015. He has been teaching BJJ at Ralph Gracie since 2011 (starting as a purple belt). He launched the Dogtown BJJ program in February, 2018.

Alan's philosophy is that "technique overcomes all, when properly taught and applied." He is equally excited to teach students of all degrees of experience and walks of life.

Alan is adored by his students, as evidenced by this sampling of endorsements from current students:

"Alan Joyce, being an experienced black belt and a perennial connoisseur of jujitsu, has something to teach you whether you're just starting or have years of experience in the sport."

"Alan isn't just a great instructor and coach to his students, he is a friend, mentor, and family figure. His tough exterior belies what a kind, thoughtful, and doggedly loyal man he is for his teammates."

"The clinch? Working off of your back? Survival and submissions once the fight hits the ground? Alan Joyce is a Ralph Gracie black belt and a beast amongst beasts. He makes the weak strong and will round out your MMA game big time."

“Cares deeply about each of his students’ game, and personalizes his feedback to your strength a body type. A consummate technician of genuine kindness and rough humor.”